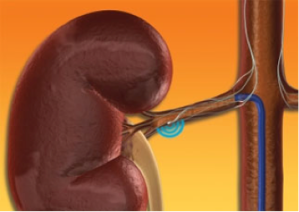 In 2006, Foundry company Ardian was well positioned with a disruptive technology to address a large unmet clinical need: a neuromodulation device to treat heart failure. Fast forward to November 2010 and Ardian has just been acquired by Medtronic for $800M upfront and an expected $500M in milestone payments. However their technology is now an RF ablation catheter for treating hypertension, a major risk factor for stroke, heart attack, and heart failure.

While it seemed like Ardian appeared out of nowhere, in truth they had been working diligently for years at building their business from the ground up. So what were the key steps which led to such success?

At the recent Biodesign Alumni Event, the Ardian team which was represented by CEO Andrew Cleeland, VP of Sales and Marketing Greg Bakan, and VP of Intellectual Property Karun Naga, discussed in detail their path. The intimate panel discussion was filled with stories and strategy as they described their journey to date and answered questions from the audience. Here is a brief recap of a few of their steps to success. 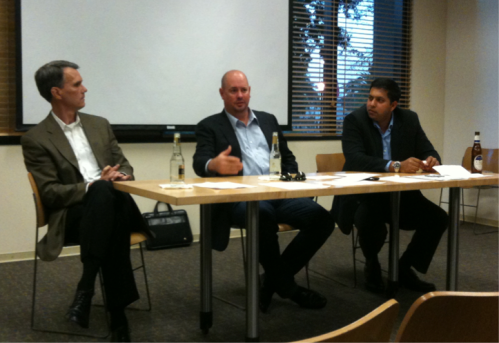 Step One: Build the team
Throughout the night the importance of team building was heard by the attending Biodesign Alumni more than any other idea. When forming a new company, the team is as important if not more so than the product. From the selection of the members to the environment that the leadership creates, the team is what ultimately ends up being successful. For Ardian, the choice of Andrew Cleeland as first time CEO turned out to be a smart move given his strong clinical and regulatory background. But in addition, Andrew and the rest of the leadership team created a strong dynamic that fueled collaboration throughout the company. At the Alumni Event, they shared their “Core Values” and it was clear they didn’t just hang these around the office; they used these principles to guide their decisions. For example, when talking to potential acquirers the leadership had to make the tough decision of whether to share the process with the rest of the company. On one hand it was risky to share because it may distract people from their work, but not being transparent with the team could create a separation within the team. Ultimately, they decided that being completely upfront and honest with everyone was the right thing to do and they didn’t look back. Additionally Greg, stressed the importance of socializing outside of work. Whether it was happy hours or sports, they placed an importance on building strong relationships with each other which in turn enhanced their workplace dynamics.

Step Two: Pivot
While focusing on a large unmet need and developing a disruptive technology are important, being open to directional changes is equally key. Initially focused on treating heart failure with an implantable neuromodulation device, the Ardian Symplicity is now an RF ablation device for treating hypertension. Andrew described these changes as crucial evolutions from the original vision that allowed for the ultimate success of the company. However, although they were important they weren’t always obvious. While in the middle of raising a Series B, Andrew and team realized that the results that they were getting from their neuromodulation device weren’t reliable. Although it would be tempting to continue to push forward with their existing approach, they recognized that a new embodiment might prove better. When VP of R&D Denise Zarins demonstrated positive results in a porcine model with RF ablation as an alternative approach, the group recognized the need to pivot and made the decision to change directions.

Step Three: Protect
One of the most important assets for a young company is Intellectual Property. Even though it is expensive for a startup, IP needs to be a high priority both in terms of protection and discretion. The Foundry team recognized early on that intellectual property would be a large percentage of the value created at Ardian. They began by filing utility patent applications early and often, even as the idea was still taking shape. Their emphasis on IP was fully embodied in the hiring of in-house patent attorney Karun, which is rare in medical device start-ups that only have 20 employees. However this turned out to be a valuable move since the team knew that once the first results were published there would be multiple fast followers. At the time of acquisition Ardian had 8 issued patents, 41 published patent applications, and an undisclosed number of unpublished applications. Additionally, what many Biodesign alumni found interesting was Ardian’s focus on method patent claims which are often considered to be weaker than product claims. Karun described how they initiated a regulatory strategy that was aligned with these method claims by seeking approval for the specific methods that were covered by their patents.

Step Four: Have a long term vision
For startups it is easy to get lost in the here-and-now, paying attention only to the present concerns. However, a long term vision is a must-have for guiding a company to be a sustainable business. One of the highlights of the night was watching Andrew draw out on a whiteboard Ardian’s timeline as a function of their milestones and valuation. Specifically of interest was their own internal prediction of the possibility of a buyout at each step, which at the time of their actual acquisition in November was still fairly low. Ardian clearly built the company with the long term in mind, evidenced best by their decision not to start wide spread European sales following their 2009 CE mark. Instead they recognized that controlling the patient selection and physician usage was immensely more valuable in the long run than several million in short term sales. Additionally, they remained focused on their primary market (hypertension) which kept their burn rate low. Andrew said, “We are not going to anticipate success and build up an infrastructure in anticipation of hitting a milestone. We prefer to run lean and let our success guide our way.”

Step Five: Have a short term strategy
The line between being stealthy and being a hermit can be fuzzy. Although they were building a business for the long haul, Ardian recognized the value of strategic partnerships. “We had been so far under the radar that no one knew anything about us, so we took the opportunity to introduce ourselves to a select number of large companies that we thought could potentially help us down the road,” says Andrew. Starting these discussions at the appropriate time was a critical decision. The team stated that while it only took a couple of weeks for the Medtronic deal to come together, it took over a year of discussions to get to that point. Greg and Karun joked that for a couple years Andrew was the most well liked med tech CEO because of his frequent elbow rubbing with strategic partners. Clearly it paid off, as it has been said, “Ardian didn’t need to sell, Medtronic had to buy.”

In all likelihood there were at least a few more ‘steps to success’, although Andrew, Greg, and Karun presented their story in such a clear manner that it seemed as easy as that. The Biodesign Alumni were very fortunate and grateful for the opportunity to have such an amazing panel discussion and would like to thank everyone who made the event possible.

A more detailed account of their rise to success can be found in this 2009 In Vivo articleand this summary of the Ardian timeline.

One response to Ardian shares with Alumni